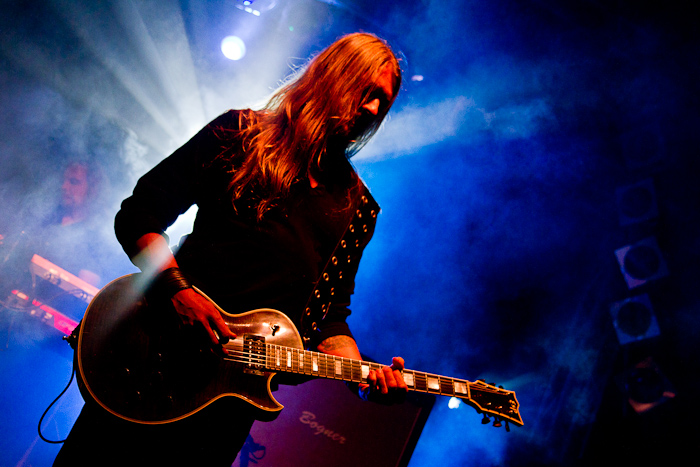 As the final installment of the Sotkamon Syke 2011 photographs we get the final artist of the evening – Amorphis (previously The Man-Eating Tree, Tarot). Initially I was hoping we’d be getting some pyros during the show, but unfortunately none were set up and I found out from the crew that the stage was too small for them to use pyros. I was also fairly certain that the gig would be challenging lighting wise – as Amorphis practically always is. Especially during the first three songs.

Early on into the set it became apparent that during the first three, Tomi wouldn’t be getting any significant amount of light in his face so I concentrated on getting good silhouettes of him and trying to get good shots of the rest of the band. Continuing from the audience after the first three with a longer lens then let me get some good shots of Tomi that were lit a bit better.

And I also got the chance to get some shots that showed the rain that had been plaguing us all evening.

Since we’ve seen the play quite a few times and I have a good amount of solid and typical concert photography shots of the band I really decided to explore the possibilities that the strong backlight and raindrops on the lens would give me. This is one of my favorites:

The Amorphis set was as solid as they usually are and contained most of the typical songs they play in a festival setting. Majestic Beast was a great exception to the typical set.

As always, more pictures in our gallery.