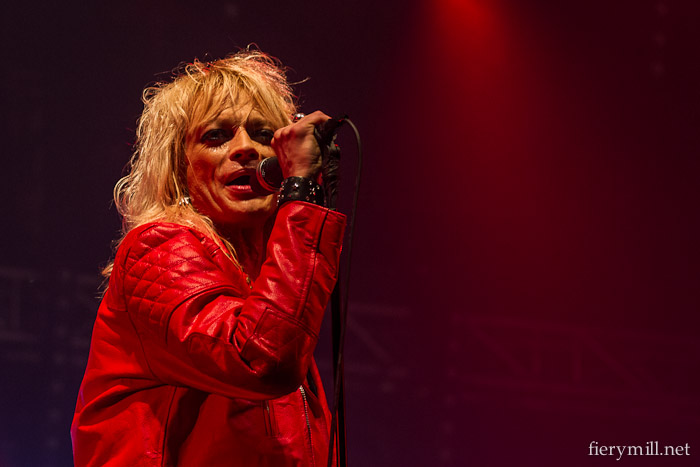 As stated earlier, the main act for the warmup of this years Ilosaarirock was Michael Monroe. Michael is one of the true legends of Finnish rock – after all Hanoi Rocks is mentioned as one of the first bands of 80’s glam rock and the first Finnish band to be any kind of success outside of Finland.

Michael is known for his energetic performances and his inability to stay still while on stage. The 50 year old (he celebrated his birthday the weekend before in Ruisrock in an incredible gig) didn’t disappoint. As a photographer, I’m very glad I’d done my homework and watched YouTube videos of him performing live. It gave me many pointers of what to watch out for and still I felt like I lost him every know and then.

The crowd was also wild, especially in the front rows. While I can anticipate a circle pit in metal gigs, the energy and wildness of some of the fans really surprised me. The crowd was so lively that we found ourselves moving back from the third row in the crowd to the sixth or seventh during the set.

Right behind us for most of the gig was an older man, who recalled seeing Hanoi live before Razzle’s death and during the memorial gigs they threw in early 1985. We’re young enough to only have seen Hanoi in it’s later incarnation when Andy McCoy and Michael restarted it in the last decade.

For a set that started at 0:45 and ended around 01:45, the crowd sure didn’t show any sign of slowing down. If anything, as the gig neared it’s end the crowd got more and more energy. An unforgettable experience that even the slight problems with the mix can’t ruin.

Shooting notes: As with Viikate’s set, I was initially planning on shooting the first three with the 70-200 at ISO800. However, with the crowd being as lively as they were, the long lens seemed like too much of a risk and I quickly switched over to the 17-55 for the rest of the set. I also bumped up the ISO to 1600 since Michael spent a large portion of the gig in front of the monitor cabinets and thus out of the stage lights. All in all there was plenty of light, but the man just moves around too much ;)

And as usual, more photographs in our gallery.