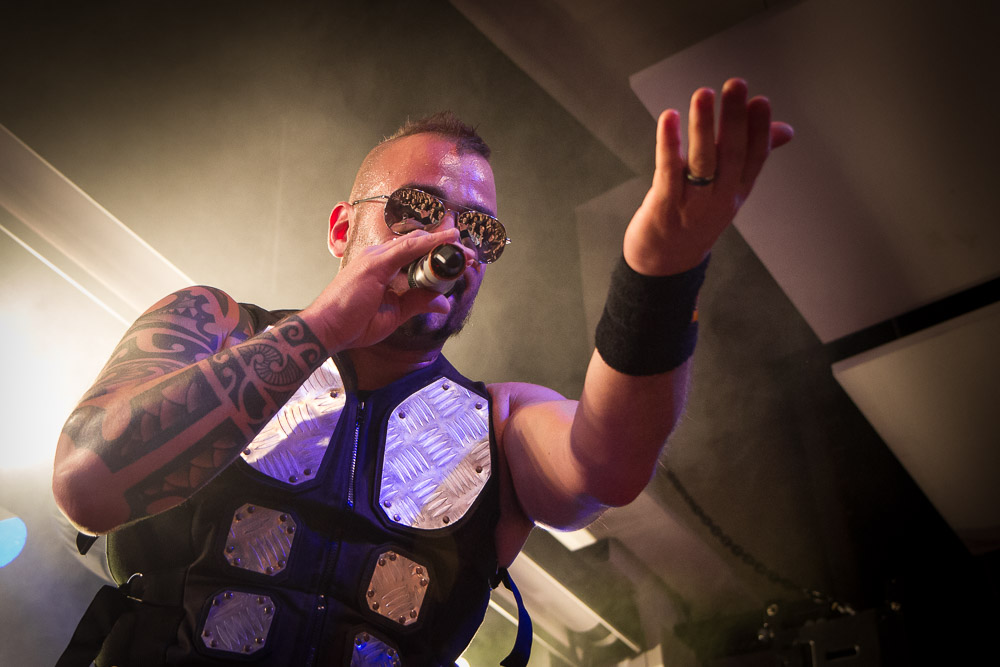 An unexpected thing happened, and Sabaton sold out Kerubi about four months before their gig. I’m fairly certain that no band to date has sold out the venue that long before their gig, but luckily Anna and I managed to get tickets (thanks Hannes :) ). I was also able to get a photo pass for the gig. And it turned out that it was a good thing that I asked about the photo pass beforehand since contrary to most gigs at Kerubi, this time a photo pass was required to use a SLR, let alone get access to the photo pit.

As someone who spends most of his time listening to either death metal or country (don’t even ask, I’m not sure how that happened), Sabaton is a bit out of my normal repertoire. But ever since Hannes left Evergrey and joined them, I’ve been keeping a closer eye and ear on the band.

Don’t get me wrong, as power metal goes Sabaton is a prime example and a very good representative of the genre. And they do make good workout music. But most power metal is simply too happy for my taste and the gloominess of melodic death speaks to me more. And I also have a problem with Sabaton’s lyrics. Mind you, the problem isn’t that I am in any way offended about their use of war in their lyrics but the fact that I start binge reading Wikipedia for the historical articles behind their lyrics destroying any productivity I may have had. And yes, it happened to me several times while editing these photographs.

This was the second time we’ve seen Sabaton. The first time was when Hannes was still playing with Evergrey and both bands were touring the US. Pictures of Sabaton’s gig can be found in our old gallery. In fact, two of the photographs I took during that gig were printed and given to Joakim during this gig since they were something special that I’ve never seen in a metal gig so far.

This time around the years and hundreds of gigs that Sabaton has thrown showed. And the experience showed itself only in a good and positive way. I loved the way Joakim and the rest of the band interacted with the audience and goofed around with each other on stage. I have no idea how routine most of their tomfoolery is, but it was much appreciated.

And I’m certain that Joensuu and Kerubi let Sabaton know that they are welcome in town again!

“Oh wow, my drumstick can fly.”